This past growing season, Co-op introduced the first commercialized canola hybrid from Nuseed Canada, NC355TF, to Western-Canadian growers. This next-generation hybrid is a brand-new source of genetics. 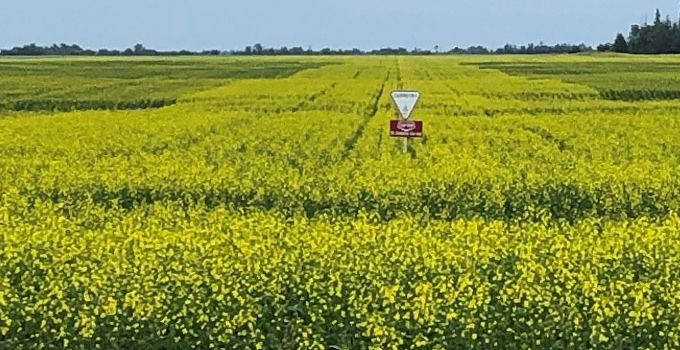 “It’s a new germplasm developed in Australia, with access to some of the best blackleg-resistance genes in the world,” said Mike Hilhorst, a Regional Grow Team Advisor at Federated Co operatives Limited (FCL). “NC355TF can be grown in many areas across the Prairie provinces, and we’re excited about the potential long-term, value-added opportunities that this genetic pipeline will provide in the future for canola growers across Western Canada.”

“Over the past six years, Nuseed has adapted its germplasm and moulded it to Canadian environmental conditions and the needs of Western-Canadian farmers,” explained Roger Rotariu, North American Marketing Lead at Nuseed.

“We can use those building blocks of a canola hybrid to create products that will have unique values to Western-Canadian growers, including key traits for maturity, good yield potential and defence of blackleg.”

NC355TF is the first registration in a new line of canola genetics for Canadian growers. Co-op is thrilled to offer this next-generation canola genetics exclusively to our customers.

This new Nuseed canola hybrid has TruFlex Roundup Ready technology, so farmers can spray higher rates of glyphosate to control those tough-to-control weeds over a wider window of application. As a new germplasm, farmers can use this variety as a tool for blackleg resistance.

“In areas that have heavy blackleg disease pressure, this is going to be a very good variety,” explained Hilhorst.

In 2020, Nuseed partnered with Co-op for the introductory launch of this canola hybrid with St. Isidore Co-op in Falher, Alta., conducting a Nuseed trial. They compared the NC355TF to several competitor varieties, and initial field results look promising. Tarren Dion from St. Isidore Co-op closely monitored the variety and its in-field performance.

“The NC355TF is a great-yielding variety that grows tall but has great standability,” said Dion. “Overall, this new hybrid has strong stalks and large pods. NC355TF would be great for rocky or hilly land, since it grows tall and pods high, allowing you to swath a little higher if need be.”

Dion noted that ease of swathing and combining was noticeable throughout the Nuseed trial, comparing it to the best canola varieties they’ve had on the farm where the trial was conducted.

If you’re looking for a new variety with top-tier blackleg resistance, first access to new genetics and new end-use market opportunities for your canola, this may be the variety for you.

“This new variety has good early season vigour, it stands well, and it combines easily,” said Hilhorst. “We’ve been pleased with what we have seen so far and look forward to new varieties coming for 2021 with earlier maturity and clubroot resistance.”

To find out more about Nuseed NC355TF and new varieties coming in 2021, contact your local Grow Team member.